Get Prepared for Emergency Situations

Every year, thousands of people face emergency situations that can affect their lives forever. Emergencies can change an entire neighbourhood in a matter of days so it’s important to be prepared before disasters strike. Although earthquakes within the Comox Valley are...

CVRD Fireworks Permits Not Being Issued

CVRD Fireworks Permits Not Being Issued Due to extremely dry conditions, high wildfire risk, little rain expected for the next two weeks and current BC Wildfire restrictions, the Comox Valley Regional District (CVRD) will not be issuing fireworks permits for Electoral...

Save the Date: October 15th, 2022 9am – 12pm   Union Bay Fire Rescue would like to invite the community to come down and meet their community Fire Fighters, tour the trucks, and learn more about emergency preparedness. The department will also be offering a...

Fire fighting in the early days was the quick formation of a bucket brigade. Water from wells, creeks and the ocean were used. A hose was connected to the water tank on the wharf for fires there or around the company yard.

When the Washer was built in 1896, a pipe was laid from the lake to service the colliery works. Stand pipes, which were used as fire hydrants, were installed, and several hose reel stations were built around the yard. After the spectacular blaze which destroyed the Wilson Hotel and surrounding buildings in 1922, and the fire which burned the Baynes Sound Hotel in 1926, interest was generated by the company and local citizens to improve fire fighting capabilities. A 1928 one-ton Model A Ford truck owned by the CC(D)L was stripped down and refitted with hose bed, reel, and tank. An 110 gallon pump was designed and cast in the foundry. All work was done by volunteers at the shops. When the new truck was tested in April 1935, the pump recorded 210 gallons per minute with a twelve foot draft. This was the first power-driven pump on the North Island.

A lot next to the Willis Hotel was bought for $300 from Fraser and Home. The old square-fronted butcher shop which stood on the lot was renovated by I. Pollock and D. Haggart to become thedst fire hall.

With his wife and two daughters, Grace and Ethel, Fulcher had lived and worked as a mechanic in Union Bay for over twenty-five years. After only a year the chief died, and was carried to his last resting place on the fire truck.

Jake Campbell took over as chief, and in that position responded to a gigantic fire at the Deep Bay Fish Cannery. Eight firemen, with their pump sucking up salt water, worked valiantly to fight the flames which were fueled by tarred nets and two scows of fish oil. The Courtenay brigade also answered the call, and although the cannery was gutted, the twenty-five other buildings on the spit were saved.

During the next few years little was done to improve the department. The Second World War stirred renewed interest in fire protection, and the fire department was issued with steel helmets, pumps, and 1000 feet of hose. The company also replaced and extended the water system.

1944 APRIL . During recent months Union Bay, one of the most vulnerable areas in the district, has vastly improved its fire-fighting preparations by installation of a modern hydrant system which cost in the neighborhood of $12,000 and which provides hydrants throughout the residential and business sections. Previously, the community faced a difficult pumping problem in the event of fire, and its small but active volunteer fire department was faced with many problems. Most of these have been solved by the new installation.

In July 1947 the firefighters responded to a fire at Buckley Bay. A runaway logging truck had crashed into a pick-up truck containing three men, and pushed the vehicle into the truck shop. Gas and oil exploded so that little could be done to save the men trapped inside the inferno.
Over the years, as the department waxed and waned, E.T. Searle was secretary-treasurer, and managed by donations and grants to keep the truck going. He turned over a set of records of meticulous detail to the group who reorganized the department in the spring of 1952. This came about when the Community Club realized that fire insurance for their hall would be greatly reduced if there were properly trained firemen provided with approved equipment. Jake Campbell was retained as chief and Ken Peters became deputy chief. Two years later the positions were reversed, and George Cooper and Gordon Murdock were appointed as captains.

A hose tower was built and a siren was installed. With the restructuring of the department, the firefighters under chief Peters took a more serious attitude to their job, and attended lectures and classes on fire protection and fighting. Their equipment was kept in tiptop condition, with the hydrants freshly painted, ladders waxed, and the brass on the trucks polished. The brigade looked smart in sweaters and crests they bought through Edna Peters’ store. 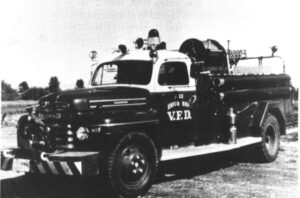 1955 OCTOBER .Union Bay gets a new fire truck made by the residents… The basis of the unit is a 1949 three-ton Ford truck chassis. This was stripped down and rebuilt. The body and equipment were designed by J. Harry Clover and, with the exception of nozzles, hoses and pumps, all equipment was manufactured at the shops by volunteer labour.

While the new truck was still under construction, on May 22, 1955 the Nelson Hotel burned. All available men and equipment fought the huge fire, with the assistance of the Courtenay department.

“There was a light southeaster blowing against us to start with, but at the height of the blaze the wind shifted, and that saved the store and the town.”

As the fire hall was too small for the new trucks, a building project was embarked upon. Again, it was back to volunteer labour and donations. Plans were drawn up by Wilf Clover for the two storey building, to be built directly behind the old hall. Logs for lumber were donated by Rosewall Logging. Harry Chapman supervised the building, and George Dutfield the electric wiring. It took several years until it was completed and the old hall torn down.

About this time the Provincial Fire Marshall’s office required all hydrants to have 2 1/2
outlets. Prior to this, each community had a size of its own. A machine shop crew came to town, took the hydrants apart and bushed them up to standard.
Over the years the firemen attended many house, car, boat, and bush fires. Looking through their minutes, it seems that every few months one of the houses at Chinatown caught fire from an overheated stove, faulty chimney, or sparks on the roof. Luckily, they were all extinguished with no loss of life.

“Seven firemen worked the fire at Maw Tawe’s house, but the building was gutted. A typical fire, burnt the Chinese type construction, tin over shingles and tar paper next to the chimney. Worked the adjoining building and saved Lin Duck’s house.”
Union Bay Volunteer Firemen’s logbook.

A ladies’ auxiliary was formed during the construction, and through raffles, teas and dances, assisted financially. They contributed to the purchase of equipment and completion of the recreation room upstairs. With the firemen, they also brought back the old tradition of Guy Fawkes night.

“The women bought our first rubber turnout coats. We got them from Seattle. We bought things cheap from the War Assets, and we got called down for it by the other departments. But we had no bucks. The colliery donated most of the stuff we had. We never bought much until we started buying that truck, and then we bought accredited equipment.”
Chief Ken Peters

With the growth of Union Bay into the seventies which included two subdivisions one to the north and one to the south of the of the town site the upgrading of the water system was an important part of the infrastructure of the improvement district. the water system would be started in 1973 and continue for two years. In some areas the old water line was the old wooden stave type that was banded with wire. New hydrants were installed in strategic areas as the water system was put in.
As the water system was being put in Hub Firetrucks from Abbottsford BC was building our new 1973 International pumper that would be delivered in the fall of that year. This would mean the days for our old tanker were now on the block as we needed the room for truck 24. Now that water was available and the new truck in the hall we then turned our thoughts to upgrade and add to out meager inventory of SCBA’s. The purchase of Survival Breathing Apparatus was now in the works. A very slow process but very essential to the firefighters. The next 5 or so years saw the purchase of 5 or 6 scba’s be put into the inventory Nearing the end of the decade the new McLeod Rd reservoir was the main focus to the water system. This system was placed just above the existing wooden water tank located on the corner of 7th St and McLeod Rd. Once operational the upgrading to chlorinated water was no to far behind.
In the eighties the department continued to upgrade and improve the equipment and training. The Improvement district built an office in the back of the fire hall. and the fire department upgrade their turnout gear to a nomex type for better personal protection. The old gear as some were still wearing the old rubber slickers and fibreglass helmets and some wore other inferior types of turnout gear. It was time to into some proper gear that would do the job. It was also nice to all look the some for once. Some of the old gear is still around and is used in displays and in parades around the valley.

Get Prepared for Emergency Situations

Every year, thousands of people face emergency situations that can affect their lives forever. Emergencies can change an entire neighbourhood in a matter of days so it’s important to be prepared before disasters strike. Although earthquakes within the Comox Valley are...

CVRD Fireworks Permits Not Being Issued

CVRD Fireworks Permits Not Being Issued Due to extremely dry conditions, high wildfire risk, little rain expected for the next two weeks and current BC Wildfire restrictions, the Comox Valley Regional District (CVRD) will not be issuing fireworks permits for Electoral...

Save the Date: October 15th, 2022 9am – 12pm   Union Bay Fire Rescue would like to invite the community to come down and meet their community Fire Fighters, tour the trucks, and learn more about emergency preparedness. The department will also be offering a...

For all emergencies
dial 911